Do you ever wonder how a brand can establish such a prominent social media presence? It isn’t easy, but with the right social media strategy, the job can be done. Case in point: Once a struggling fast food chain restaurant, Taco Bell is now a social media sensation.

Taco Bell has garnered nearly 10.4 million Facebook fans and 1.7 million Twitter followers, not to mention their many other supporters on other social channels, such as Snapchat and Vine. In the ’90s, Taco Bell was known for their old slogan “Think outside the bun.” However, newer and younger consumers wanted something more than just food; they wanted the overall brand experience and, ultimately, a cool lifestyle.

We’ve already gone over how to market to millennials, so now let’s look into which specific social media strategies Taco Bell uses to do that best.

Nowadays, customers—in particular, millennials who were born into the digital age—expect no different from businesses who are present on social media. Just like when online users engage with their friends through social media, they always assume that somebody, such as a brand representative, is on the other end and will quickly respond to them. Studies show that customers expect a response from a company within an hour when it comes to Twitter, especially if it’s a complaint. Taco Bell recently employed a #TacoEmojiEngine, in which Twitter users send @TacoBell a tweet containing the taco emoji and a second emoji of their choosing. Then, Taco Bell replies back with a relevant photo or GIF that’s an amusing mashup of the two. Twitter users receive a response within seconds, thus quickly boosting their brand loyalty.

People use social media to connect and have fun, not to drown in posts that are selling products or services. Rather than accepting their position as the passive consumer, now, customers want businesses to feel like a friend; they want authenticity to shine through.

Put simply, people want their favorite brands to “keep it real,” and Taco Bell does just that with the perfect amount of humor and wit, as is evident in the following example tweets: 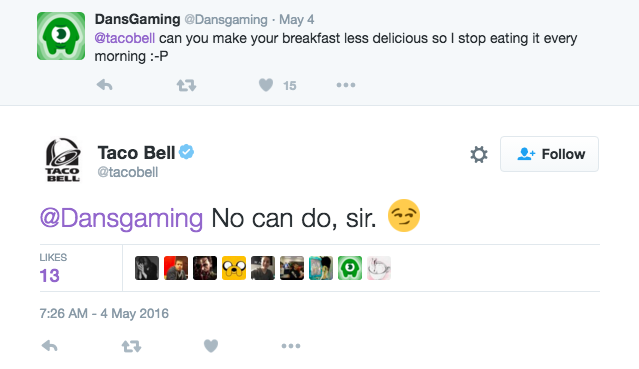 Taco Bell doesn’t allow their customers to feel as if they’re talking to an automated robot. Each of their social media replies is tailored and specific—they are never a matter of “Ctrl+C” and “Ctrl+V.” This strategy cultivates a digitally intimate relationship between Taco Bell and their customers. Ultimately, Taco Bell teaches us to stop selling, and to start talking.

#3: They highly value their customers.

It’s in our nature to want to be noticed and credited for the things we do. Customers always want to be a part of the experience, and Taco Bell’s social media strategy has acknowledged them as one of the most valuable assets of their brand.

Taco Bell blurs the traditional line between producer and consumer by encouraging user-generated content. They show us what it truly means to appreciate the customer. Take a look below.

Taco Bell shares the experiences their customers have with their brand, often in the form of a retweet on Twitter. Whether or not the images are high quality, Taco Bell makes sure to share to show they care. In addition to sharing consumer content, they also pay close attention to what their customers have to say.

Almost every move Taco Bell makes on social media creates buzz and lasting impressions. They go above and beyond, to be adventurous and experimental in their social media strategy, just as their demographic is.

As one essential component of their strategy, Taco Bell introduces new menu items in bizarre ways that keep their customers curious and engaged. In the following example, they introduced the Cool Ranch Doritos Locos Tacos via a six-second Vine. More recently, Taco Bell unveiled the Quesalupa in a 30-second Super Bowl commercial. Prior to the big reveal, they allowed people to preorder the secret menu item online, even when they were unaware of what is was. The campaign provided intrigue, even pulling in people who weren’t initially Taco Bell fans.

If there’s one thing that Taco Bell’s social media strategy boils down to, it’s that to reach quantity, you must first understand the importance of quality. Your business doesn’t have to follow the exact same footsteps as Taco Bell, as not everyone has a millennial audience. Instead, find what’s unique to your brand, making sure to understand and listen to your demographic.